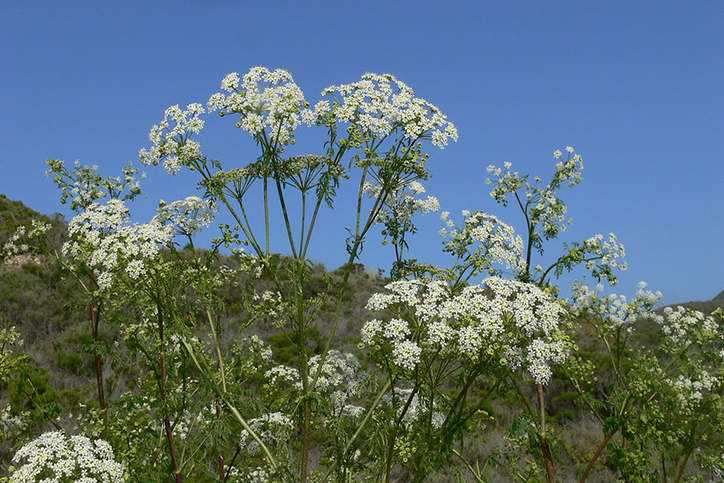 Chances are, you’ve seen poison hemlock in fields and vacant lots, and along roads, fences, and streams when traveling around Maryland. It grows in moist soil environments. Poison hemlock is a toxic weed that grows in almost every state in the United States. All parts of the plant are toxic due to an alkaloid called coniine. Let’s learn more about poison hemlock, its look-a-likes, and how to get rid of it.

Poison hemlock have hollow green stems with red or purple spots and streaks on them. The leaves along the stems are green and look like ferns. They have white flowers that are in clusters shaped like umbrellas. The white flowers typically bloom during June and July. It can be up to 6 to 10 feet tall when it’s fully grown!

Touching any part of the plant – flowers, leaves, stem –  can cause skin irritation. If this happens, remove any clothing or jewelry around the area and rinse the skin with lukewarm (not hot) water for 10 minutes. Then call the Maryland Poison Center (MPC) at 1-800-222-1222 for more information.

Eating any part of the plant can be harmful. Initial symptoms can include nausea, vomiting, confusion, slowed breathing, and an increased heart rate. Later symptoms include slowed heart rate, seizures, and muscle paralysis. Death is possible due to respiratory paralysis. If poison hemlock is eaten, wipe out the mouth and give a small drink of water, then call the MPC. Do not make a person vomit using a finger or a home remedy.

How to Dispose of It

Poison hemlock can be pulled or dug out of the ground. When handling poison hemlock, it is important to wear personal protective equipment. This includes long sleeves, gloves, long pants, close-toed shoes, and protective eyewear. When you are finished working around this weed, remove and wash your clothes.

An herbicide (weed killer) can also be used to get rid of the weed. When using an herbicide read the directions on the label before using it and follow them. For more information, read our previously published blog on herbicides.

The weed spreads by seeds, therefore when removing or controlling poison hemlock, try not to spread the seeds into the surrounding areas or bodies of water. Most seeds fall naturally from September through December.

How Not to Dispose of It

Do not burn poison hemlock. Inhaling the smoke can irritate the lungs. If you inhale smoke from burning poison hemlock, leave the area and call the MPC for more information.

Socrates, a famous Greek philosopher, died after drinking hemlock juice in 399 BC. The red or purple spots on the stem of poison hemlock are called the “blood of Socrates.”

Poison hemlock was sold as a garden plant in the 1800’s because of the white flowers. They called it “winter fern”.

Call your local poison center to speak with a poison expert if you or someone you know has come into contact with or eaten poison hemlock. Poison specialists can be reached 24 hours a day, seven days a week for free by calling 1-800-222-1222.

Emily is responsible for public education and communications at the MPC. This includes going out in the community, and curating the content on MPC’s social media pages, including, Facebook, Twitter, YouTube, and this blog! Emily loves working with people of all ages, and as a Maryland native, wants to reach out to all Marylanders with our poison safety messages.