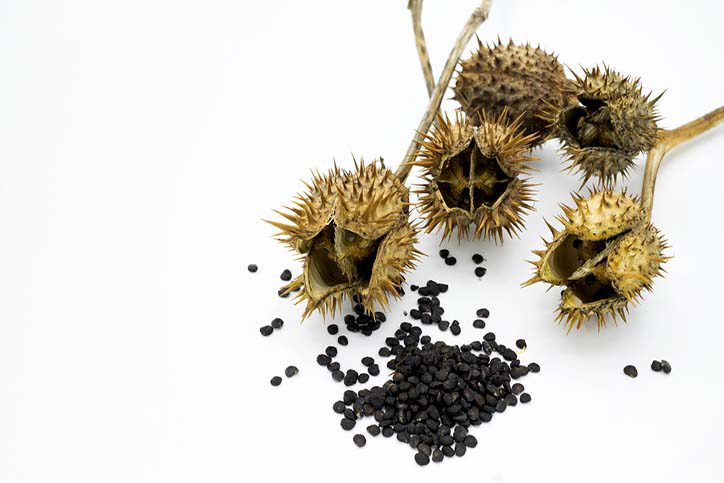 Jimsonweed, also known as “thorn apple” or “devil’s trumpet,” is a plant that’s flowers bloom in the summer and seed pods bloom in the fall. All parts of this plant – seeds, stems, leaves, roots, and flowers – are poisonous if ingested. Let’s learn more about jimsonweed as we move into the fall season.

This plant has large, white trumpet-shaped flowers that produce spiny pods. The pods form in the fall and are covered in spines. When ripe, they open up to reveal four sections. The opened pods contain tiny, black or dark-brown seeds. The plant may grow up to four feet! It is commonly found along roadsides, pastures, fields, and barnyards. The seeds are the most toxic part of the plant, but all other parts including the stems, leaves, roots, and flowers are also dangerous. Animals tend to keep away from this plant due to its bad smell. 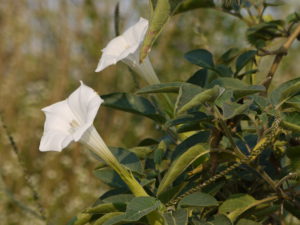 Children may find these plants while exploring outside. Young children often will place anything in their mouths, including naturally growing plants. Overall, children should be taught not to eat any part of a plant that did not come from the grocery store or farm.

Ipomoea (moonflower) is a flowering plant that looks similar to jimsonweed, and one may be mistaken for the other. They both have white, trumpet-shaped flowers. Flowers and shoots from some Ipomoea species are used as an ingredient in food dishes and salads. While moonflower seeds contain a toxin, other parts of the plant are generally non-toxic. If jimsonweed is mistaken as a moonflower and ingested, symptoms may occur.

Adolescents and young adults may seek out these plants for the purposes of misusing or abusing the seeds and plant parts. Ingesting any part of the plant can cause psychoactive effects that can lead to symptoms and even hospitalizations. A review of jimsonweed cases reported to poison centers described groups of teens have held jimsonweed parties where multiple people became poisoned and had to seek medical care at similar times. Unintentional adult exposures have also occurred from mistaking the plant as another herb and ingesting it.

Jimsonweed is part of the nightshade plant family, which also contains the infamous belladonna, or deadly nightshade. Both plants contain the same toxins and can have similar effects. The three toxins are tropane alkaloids, which include atropine, hyoscine, and scopolamine. As previously stated, all parts of jimsonweed are poisonous due to these chemicals, but the seeds hold a higher amount of atropine and hyoscine. If ingested, symptoms can include altered speech, having trouble balancing, rapid heartbeat, dilated pupils, blurry vision, and dry, flushed, or hot skin. Severe cases of exposure can lead to intense hallucinations, seizures, extremely high body temperature, or even death. Symptoms can arise over the first hour and continue for one to three days. While a majority of patients recover, there have been reported deaths from jimsonweed ingestions.

Unfortunately, there is no antidote (specific treatment or cure) for the toxins in jimsonweed. Medicines can be used to ease the symptoms such as an ice bath for severe overheating or benzodiazepines for agitation and seizures. In the case of severe poisoning, symptoms may be more difficult to treat or be resistant to therapies and may require a combination of medicines or being placed on a breathing device.

Jimsonweed is a commonly found plant that has the potential to cause mild to severe toxicity in children, teens, and adults. The best course of action is to prevent exposures from occurring. It is important to educate children and teens not to ingest any part of a plant they are not familiar with or without an adult present. If you have small children and jimsonweed grows around your home, it may be beneficial to remove the plant from the property. Remember that the Poison Center is just a call away at 1-800-22201222. Do not wait for symptoms to call if you believe that your child, teen, or even yourself have ingested any part of this plant.

From time to time, we’ll feature posts from one of our staff members. We have 14 Specialists in Poison Information (we call them “SPIs,” pronounced like “spy”) who are pharmacists or nurses that have more than 250 combined years of experience answering our phones, and who have all passed an additional certification exam that tests their knowledge of poisons of all kinds. We also have Toxicology Fellows who are completing a two-year fellowship in clinical toxicology to develop their knowledge and skills to prepare them for their future career. Before joining our team, they worked in pharmacies, clinics, or hospitals. It’s safe to say they’ve heard it all.

Previous Article Meet Our Experts: Noelle
Next Article Don’t be Spooked by these Halloween Hazards