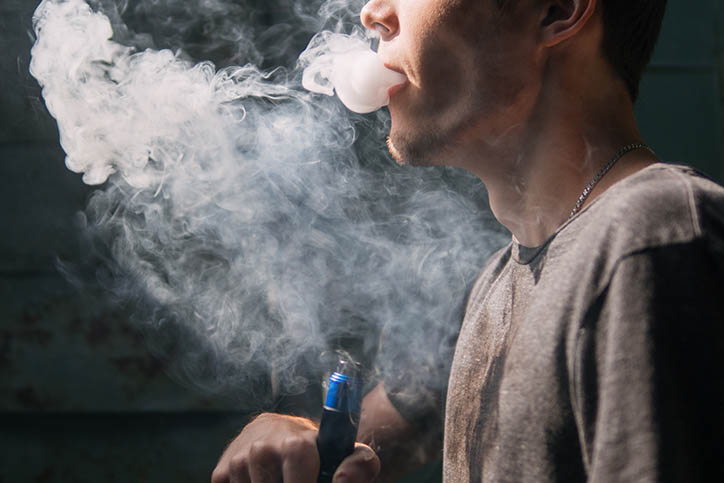 It seems as though every day there is a story about lung injury caused by vaping in the news. Federal, state, and local agencies are looking into these cases all over the country to try to determine a specific cause for patients’ illness. As of Oct. 15, there have been just under 1,500 cases reported to the Centers for Disease Control (CDC) from 49 states, the District of Columbia, and one U.S. territory. There have been 33 deaths confirmed in 24 states. The majority of the patients are under 35 years old.

E-cigarettes were introduced in the U.S. in 2007. E-cigarettes differ from regular cigarettes in that they do not contain tobacco. Instead, they heat up a liquid to make it into a vapor that can be inhaled. Researchers have suggested three different theories for the lung injury.

To help diagnose an EVALI case, doctors look for patients who have vaped in the past 90 days, and who have not been diagnosed with another infection. They may also order a lung x-ray to help with the diagnosis. Patients with EVALI may have the following symptoms:

The goal of treatment is to help lessen the symptoms which can worsen quickly, leading to respiratory failure and fluid leaking into the lungs, which makes it difficult or impossible to breathe. Patients often require oxygen therapy and severe symptoms may require a ventilator.

If you have questions about the CDC’s investigation into lung injuries associated with use of electronic cigarette, or vaping, products, contact CDC-INFO or call 1-800-232-4636.

From time to time, we’ll feature posts from one of our staff members. We have 14 Specialists in Poison Information (we call them “SPIs,” pronounced like “spy”) who are pharmacists or nurses that have more than 250 combined years of experience answering our phones, and who have all passed an additional certification exam that tests their knowledge of poisons of all kinds. We also have Toxicology Fellows who are completing a two-year fellowship in clinical toxicology to develop their knowledge and skills to prepare them for their future career. Before joining our team, they worked in pharmacies, clinics, or hospitals. It’s safe to say they’ve heard it all.