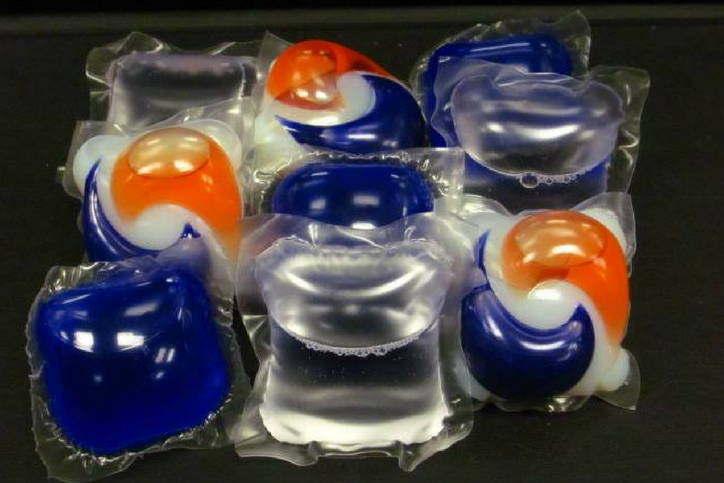 Poison centers in the US started receiving calls about exposures to single load laundry packets, more commonly known as laundry pods,  in 2012. These exposures were most common in kids 5 and under. Since 2015, the number of exposures reported each year has gone down, however these products are back in the news for a new reason.

What is the Laundry Pod Challenge?

In 2017, the comedy site, College Humor, released a video parody of a young adult tempted to eat a liquid laundry pod. The video made light of the products’ colorful and squishy appearance that makes young kids want to put them in their mouths. This humor resurfaced in January. The new “challenge” has teenagers filming themselves as they attempt eat them.

What can happen if you eat a laundry pod?

Exposure to the soap in laundry detergent packets may be associated with serious health effects. The detergent can cause burns in the throat and stomach. It can also get into the lungs making it hard to breathe. Mild symptoms include:

There is even a risk of dangerous effects like trouble breathing, coma, and death! At least 8 deaths, 6 adults and 2 children, involving the products have been reported to the US Consumer Product Safety Commissions.

The film the covers the laundry soap dissolves when wet, so the act of putting the product in the mouth can cause exposure to the soap inside. The soap is more concentrated (stronger) than regular laundry soap. This is believed to be what makes it more harmful than other laundry detergents.

Why are teens doing the challenge?

This is not the first challenge to circulate on the internet. The eraser challenge, the salt and ice challenge, and the cinnamon challenge, have all prompted teens to do something to harm themselves. If you’re like me, you’ve heard many adults question why someone would participate in something with potentially harmful consequences. These are many risk factors for teen poison and drug exposures, and many of them relate to brain development.

The thing to remember is that teens do not have fully developed brains. Teen brains have not fully formed the connections that link actions and consequences. Unable to think through the potential outcomes of a decision, teens often take more risks or do things adults would consider dangerous or silly.

Even if they do understand that something bad could happen, teens typically don’t think any of those bad things will happen to them. One might think the harmful things only happen to other people. That he or she is immortal. When combined with peer-pressure and misinformation circulated online, it’s not as surprising that a teen might try such a challenge.

What should you do about a laundry packet exposure?

If you suspect someone has swallowed a laundry detergent packet or has gotten the liquid in their eyes, call the poison center right away at 1-800-222-1222. A pharmacist or nurse will guide you on next steps.

Time is of the essence. If the person is having trouble breathing, call 911. Do not make your child vomit. This may worsen symptoms as the child may choke and get the contents in their lungs.

If you want to read more about the dangers of laundry pods, you can read the March 2015 issue of our Poison Prevention Press newsletter or read about national trends in exposures from the American Association of Poison Control Centers.

Previous Article ‘Tis the season to be poisoned
Next Article Are essential oils dangerous?